Handing in the gloves 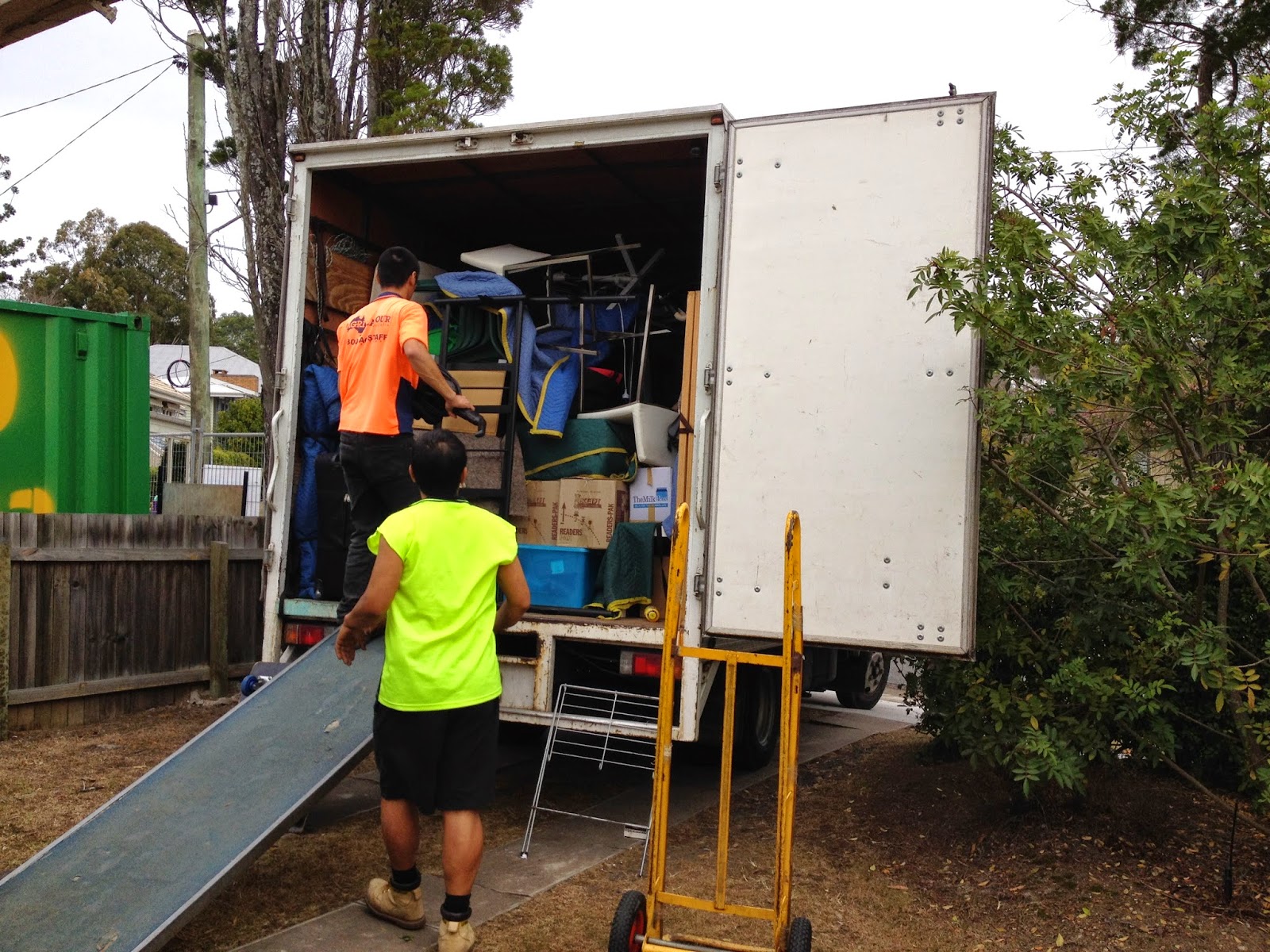 It’s been 3 months. This blog has been sorely neglected. To be honest there’s not been a lot of typewriters going on. What has been going on is a move of living arrangements from Toowong to a unit in Ashgrove, a change of job which now means full time hours or more and until very recently, a night job tacked on top of this. Free time has been a relatively scarce commodity of recent. The night job however has been some pretty good times and represents the focus of this drought-breaking post.
In essence I have been a chauffeur. The way the business works is that the chauffeurs ride ridiculously small fold-up two-stroke motor scooters over to the client’s car. We fold up the scooter, put it in its purpose-built vinyl carry case, load it into the boot of the client’s car, drive them home in their own car, take out the motorbike again and scoot off to our next job. The service is aimed at people who enjoy a tipple at the pub and is priced to be less expensive than a two-way taxi fare, so rather than having to pay for two taxi’s or having to come and pick up their car the next morning, the client calls my company and along we come. The sequence is documented in the photos smattered throughout the post. Just replace daylight with night. 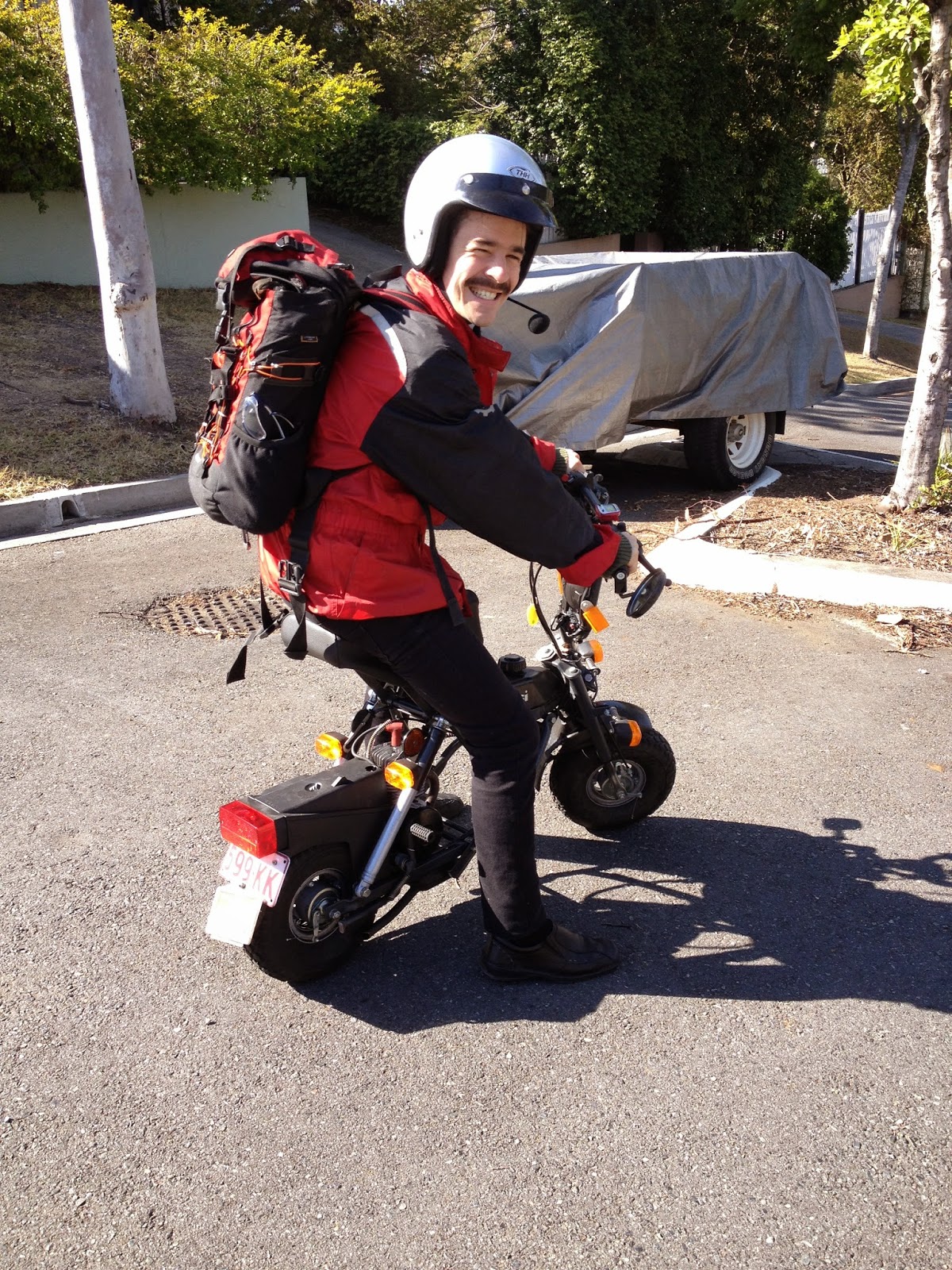 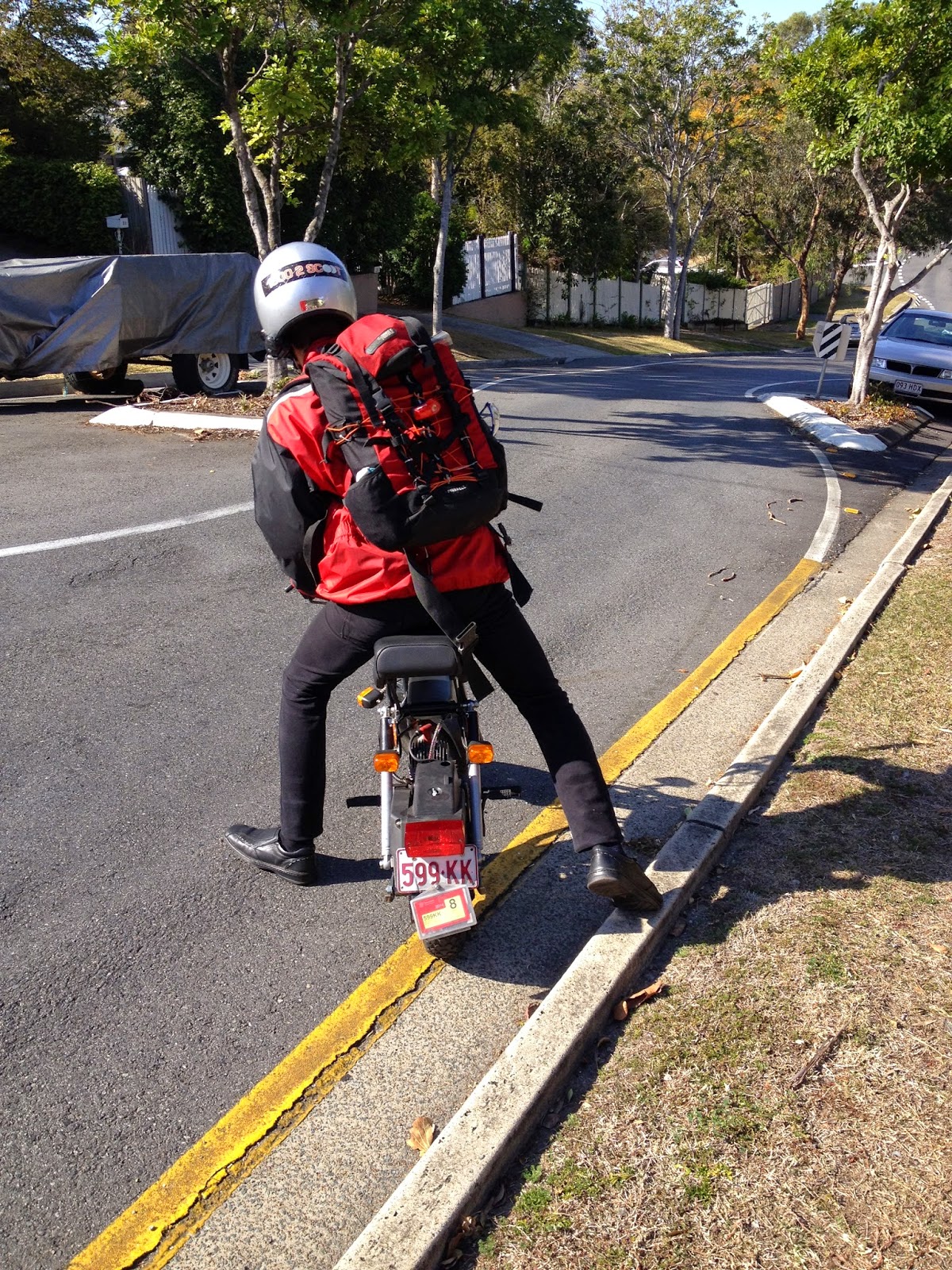 The folding scooter came with its own idiosyncrasies. Such that it didn’t leak petrol when folded up and laid on its side, once I got to the client’s car (identified by the car model and the number plate received though text message) I had to turn off the fuel line and burn off the last of the petrol in the carburettor so it wouldn’t leak out. On a suburban street this was fine, simply cut a lap or two of the street and soon the bike would splutter and cut out. In a tight multi-story car park however, this meant buzzing around and around much to the mirth of passers-by, waiting for the fuel in the carbie to burn off so I could fold up the bike and alert the client. 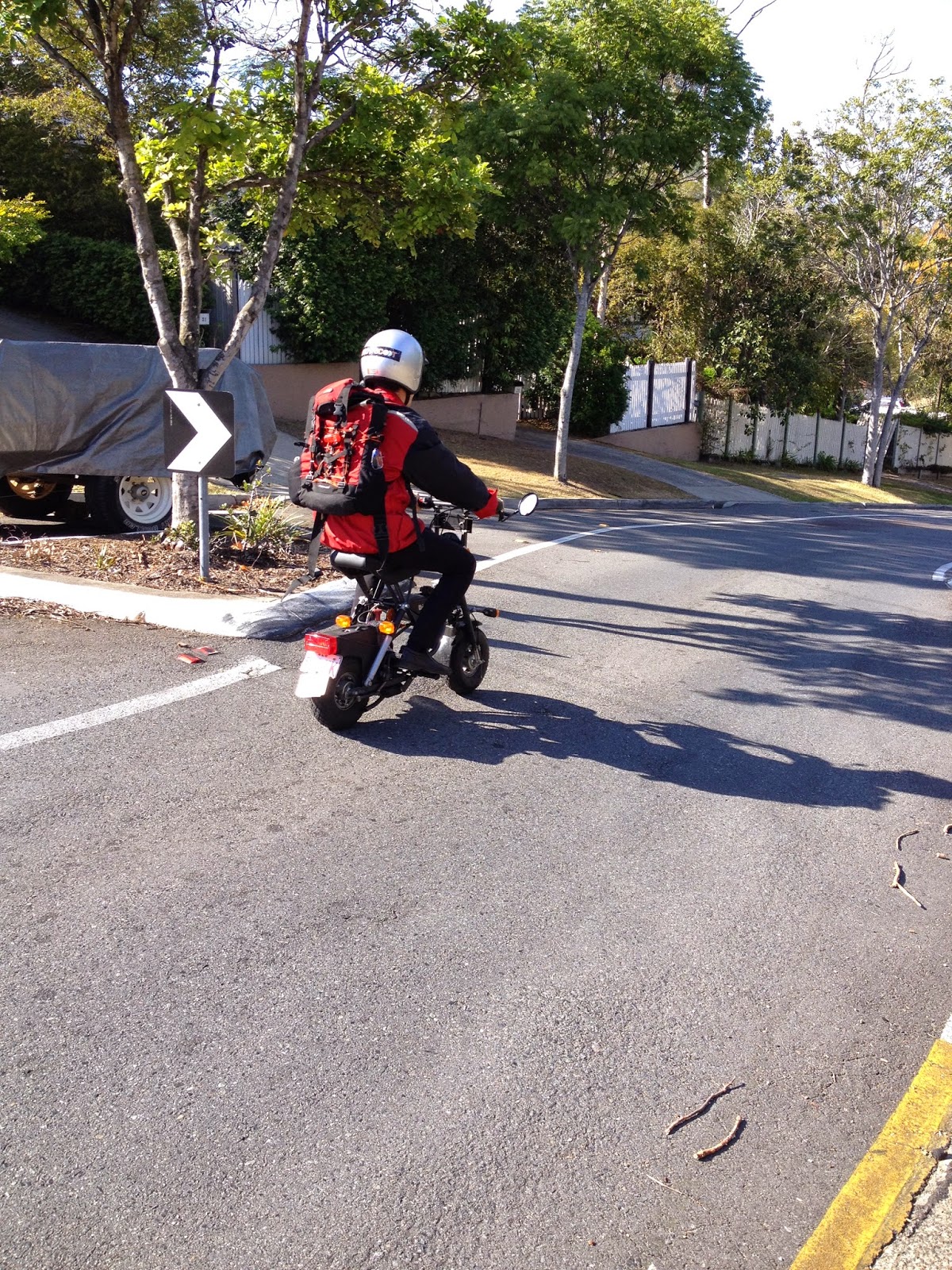 Working 4-5 nights per week for over two months, suffice to say there were a lot of clients I picked up. They ranged from high-flying barristers in top-end Mercedes, always checking their phone and looking important, to driving mum, dad and the kids home in the family car from a children’s birthday party when both parents had decided to have a couple of drinks together for a change. I drove civil engineers home in their companies’ dusty Nissan Patrols, to young entrepreneurs in their zippy little turbocharged Audi S3’s or Range Rover Evoques. During these conversations I learned all sorts of things about all sorts of things; the likelihood of Australia’s pet insurance ownership level tripling in the next five years; how one client remembered when a recently convicted murderer I had read about in the newspaper was a child and how he had burned down the local police station; the difference in constitutional legislation between USA and Australia about how far down in the earth on one’s property that one owns the minerals contained within and how this affects the nature of the Coal Seam Gas mining industries in the two countries. I got stock market tips; lectured about the alleged myths surrounding the environmental sustainability of disposable and re-usable nappies; listened to a fat man snore out breath that smelled like all the water in his body had been replaced by pure whisky, drove a man home the night he had broken up with his wife, played I-spy with two five year olds, met a close friend of motorcycle legend Mick Doohan and drove a single mum home from what can only be described as a booty-call. 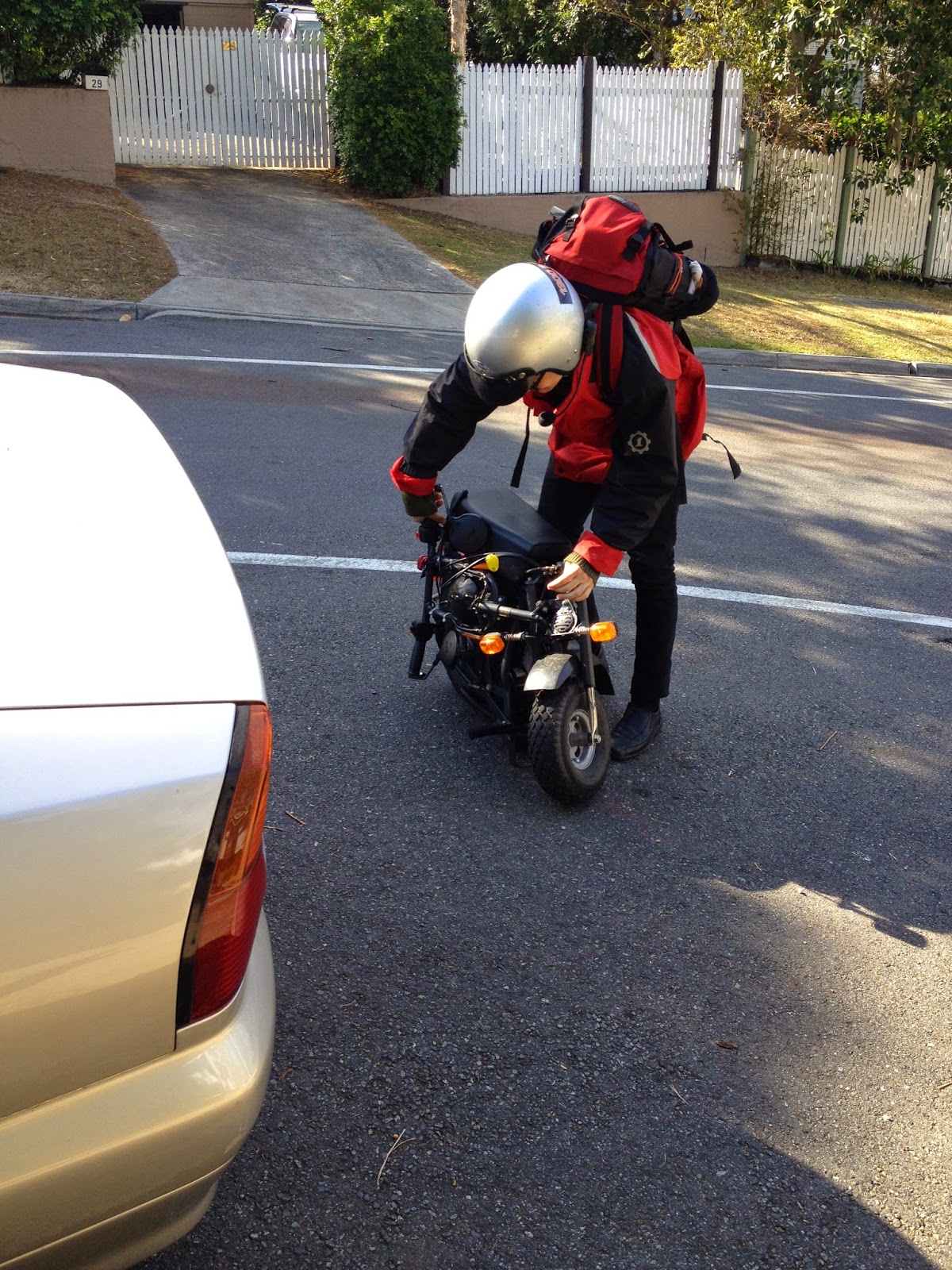 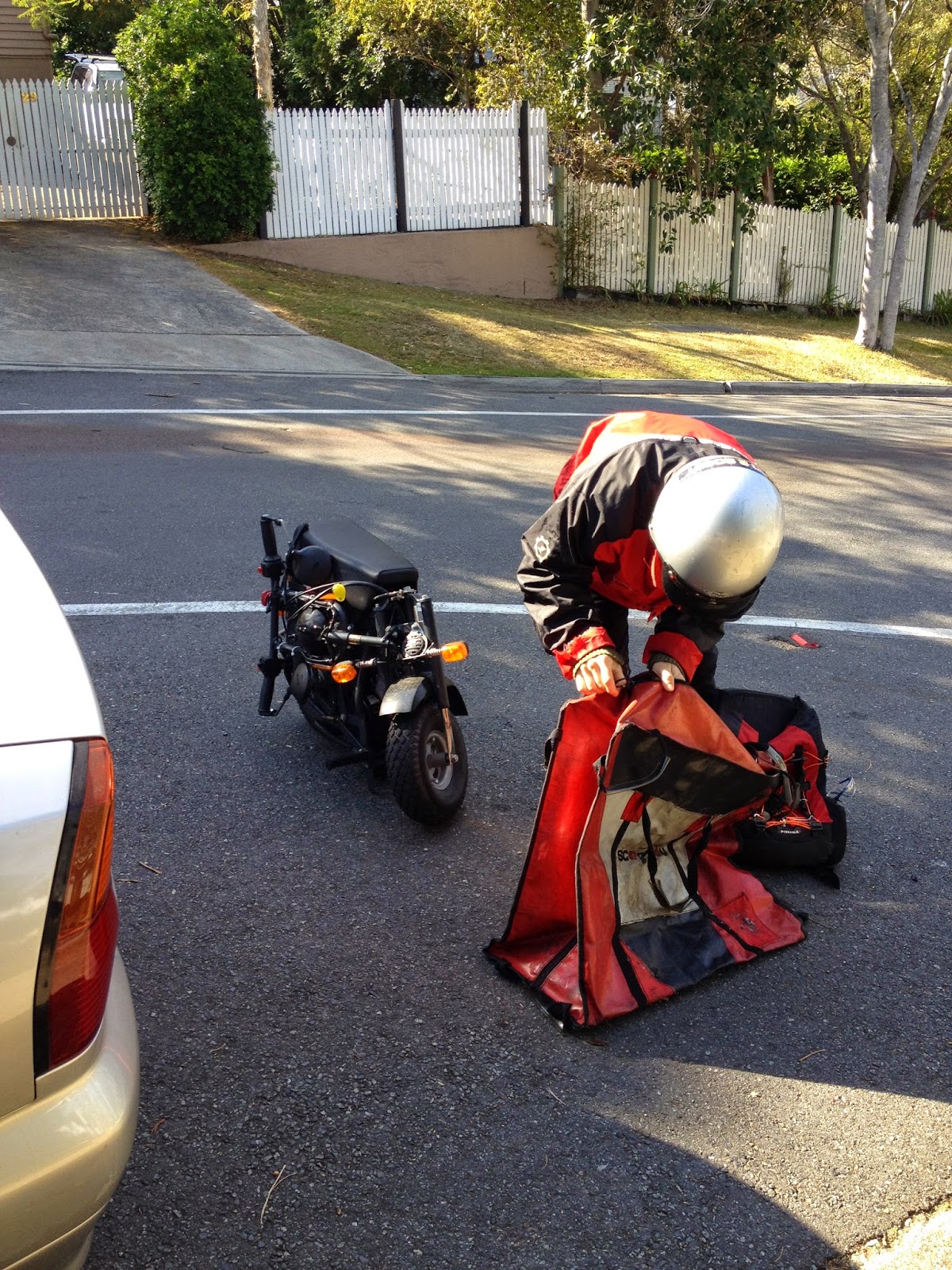 The joy of the job was sharing 15-30 minutes of various people’s lives. A small window into all these different ways of living, all these different personalities, different jobs, different value and belief systems. These were people who you knew nothing about when they hopped in the car and suddenly knew quite a lot about them when they hopped out of the car 15-30 minutes later. I learned a lot about the roads of Brisbane. Navigating on the motor scooter involved having a TomTom in the jacket pocket which communicated with the blue-tooth speaker in the helmet, telling you when to turn and other useful directions. The motor scooters were also delightfully idiosyncratic, with each one requiring a certain special touch to get it started when it was cold, knowing what to do if the suspension insert pops out, if the spark plug lead becomes disconnected or if the rear view mirrors flipped over due to wind resistance at high speed. 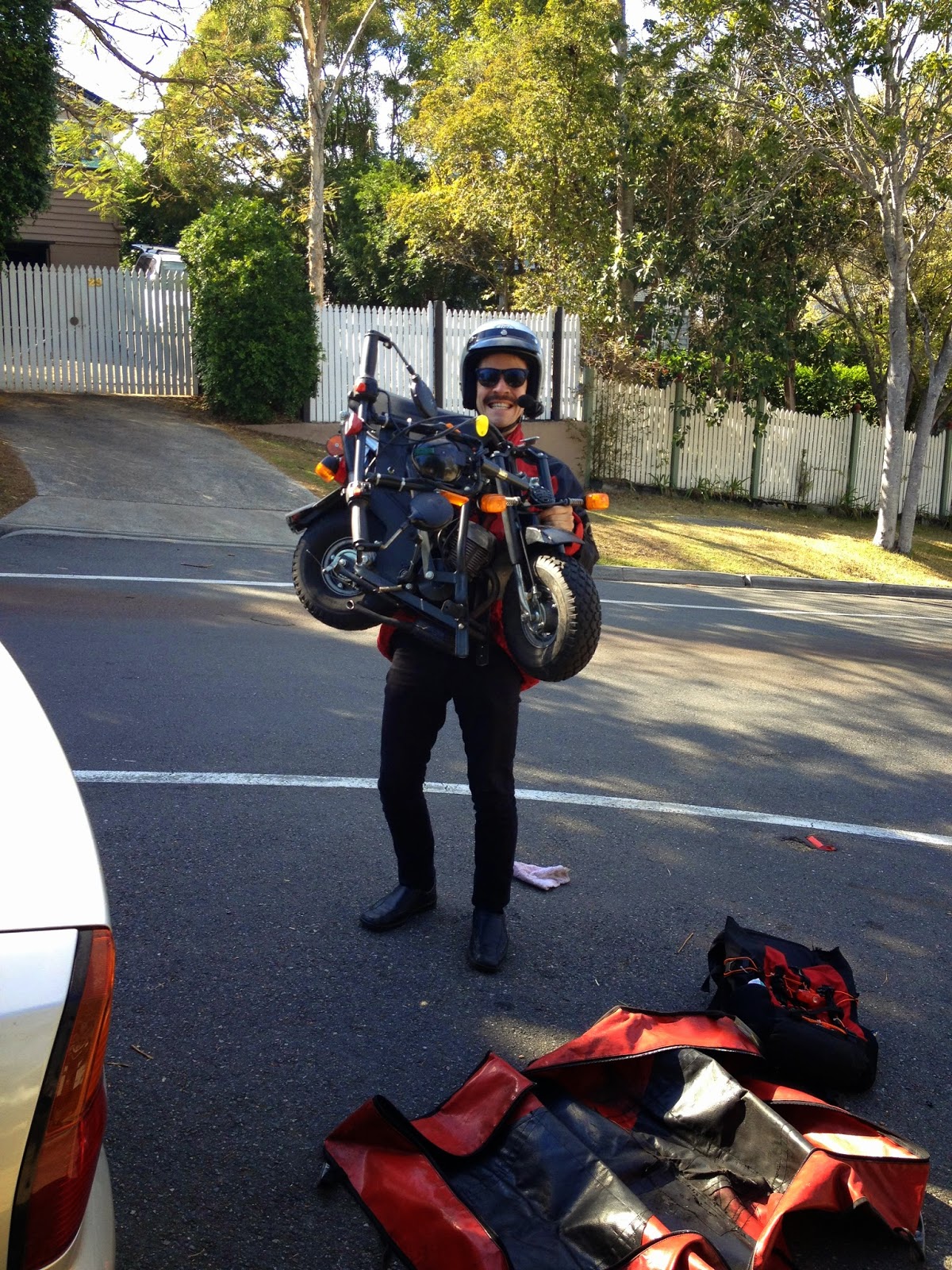 Perhaps the most interesting ride was when I was asked to pick up three people from a wake in a bayside suburb. The boss called me up saying that “For this next job mate you’d do well to employ a certain degree of tact and sensitivity”. The car was an expensive Range Rover Sport with a million electronics to do everything including manipulating the plush leather seats in an impossible number of ways. The clients when they emerged were interesting and inebriated. A flabby jowl-wobbling, wheezing combed-over man in his 60’s with a striking resembling to Australian mining magnate Clive Palmer; a tall thin man in his late 40’s; and a tall woman in her early 30’s who had not gone to great lengths to cover up her ample cleavage, sporting at least a year's supply of make-up plastered thick upon her face. All were dressed in black, impeccable and expensive business attire with the men sporting cufflinks and shiny watches. 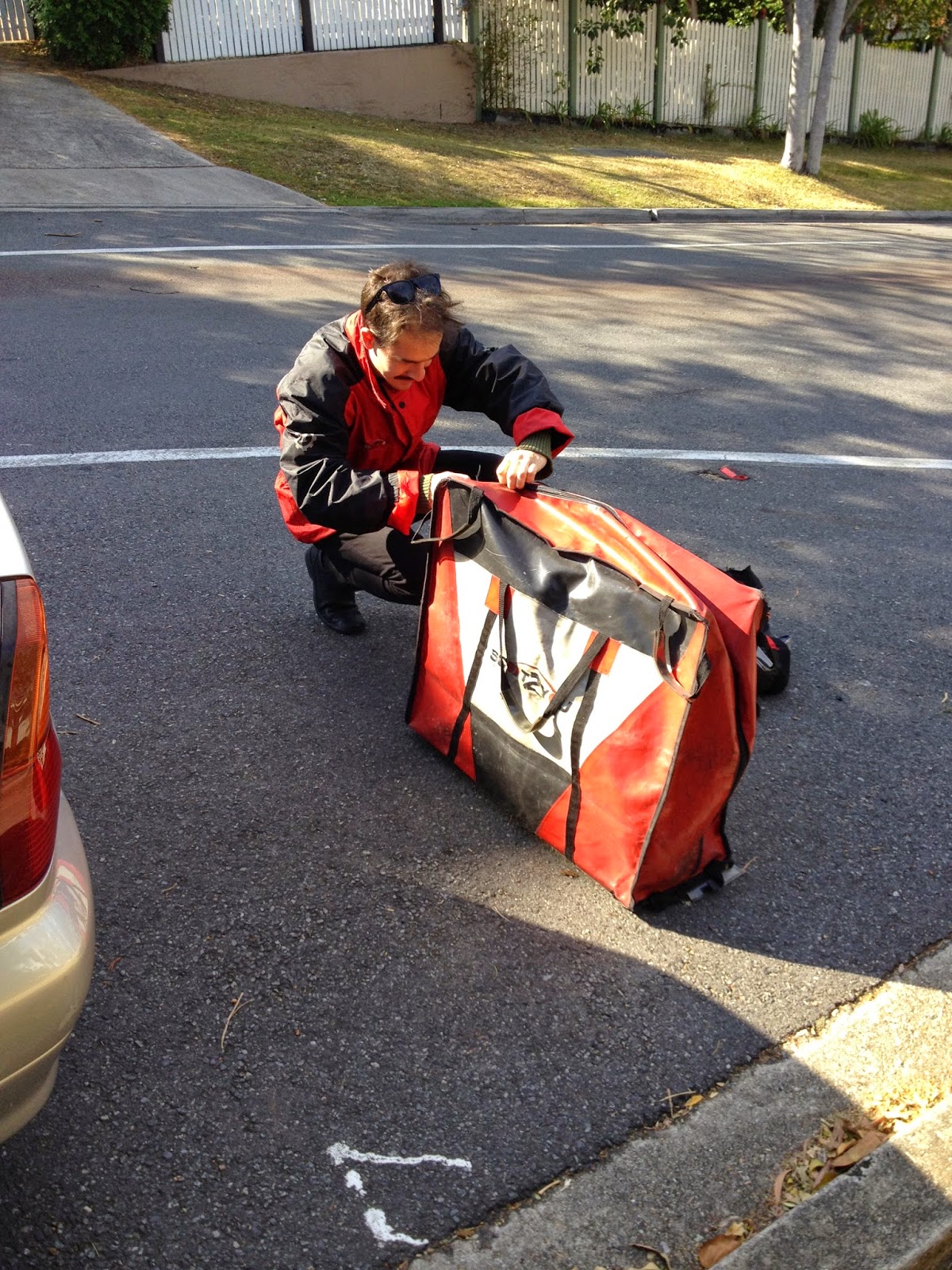 After some faffing about, we get driving (excuse the switch to present tense). I stay as quiet as possible, employing the tact I was asked to earlier by my boss. The two men start talking about share portfolios, companies to avoid, recent mergers affecting share prices and all sorts of stockmarket trader talk. The woman however is silent. I only heard one mention of the recently deceased gentleman (whose wake they had just attended) during the entire drive. So I initially assume the men are stockbrokers and the woman is the younger taller man’s wife. Through the course of the conversation however, it becomes apparent that the men are indeed both stockbrokers, but that the woman is in fact not the taller man’s wife, but a paid escort. An escort seemingly hired to be on the arm of one or both of the men and (as I learned) to chat up potential business partners / clients. This was confirmed by a very memorable quote by the Clive Palmer lookalike who, when the woman mentioned how a prospective business partner or funder of the stockbrokers had asked her during the wake about her own share portfolio: “Haw haw haw! It was more than just him checking out your portfolio love!” Both men had a good belly-laugh at this. We stopped at a chemist to buy lozenges for the escort's sore throat and I dropped them all at a riverside mansion in Bulimba and scooted off to my next pick up. 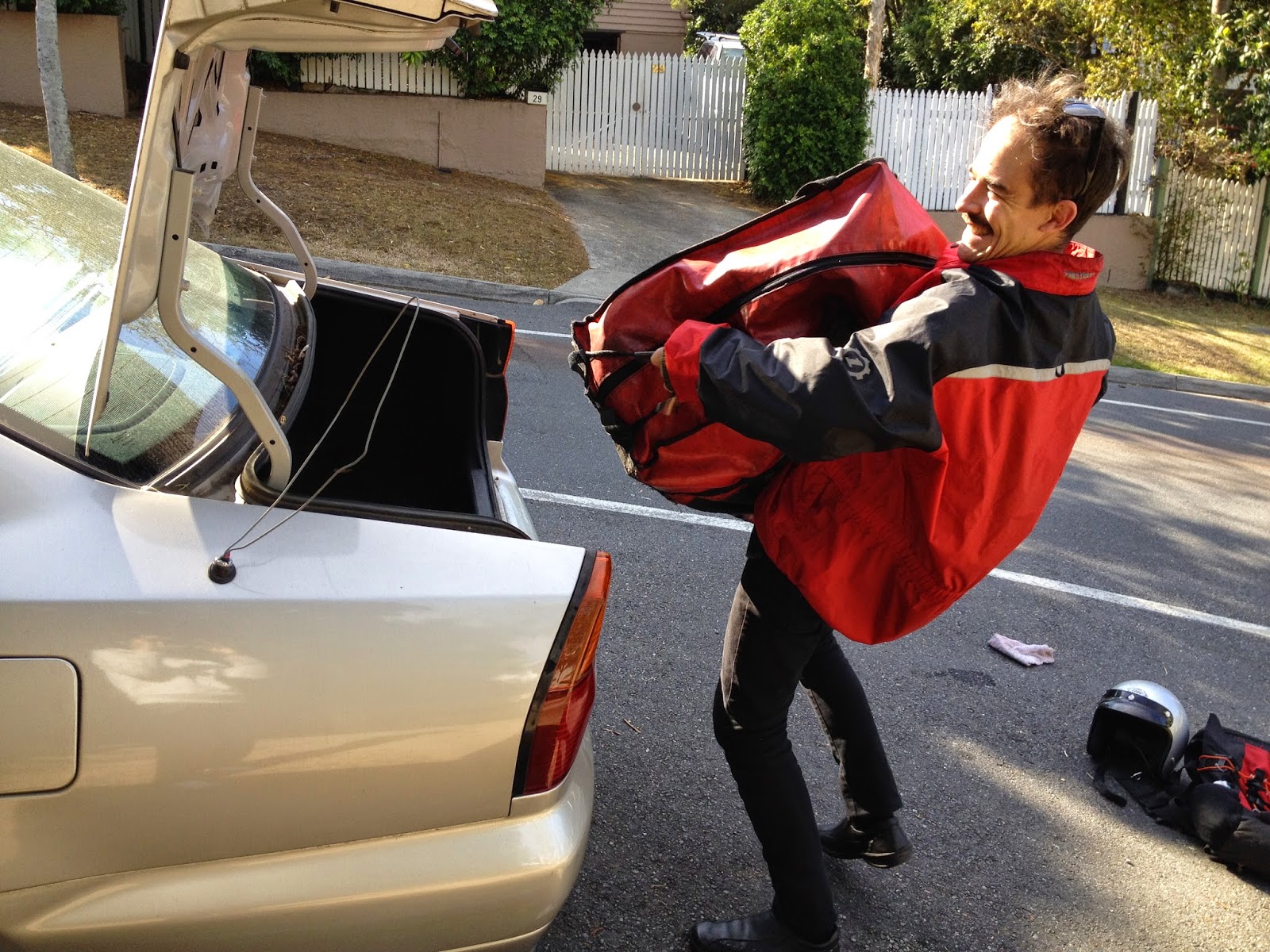 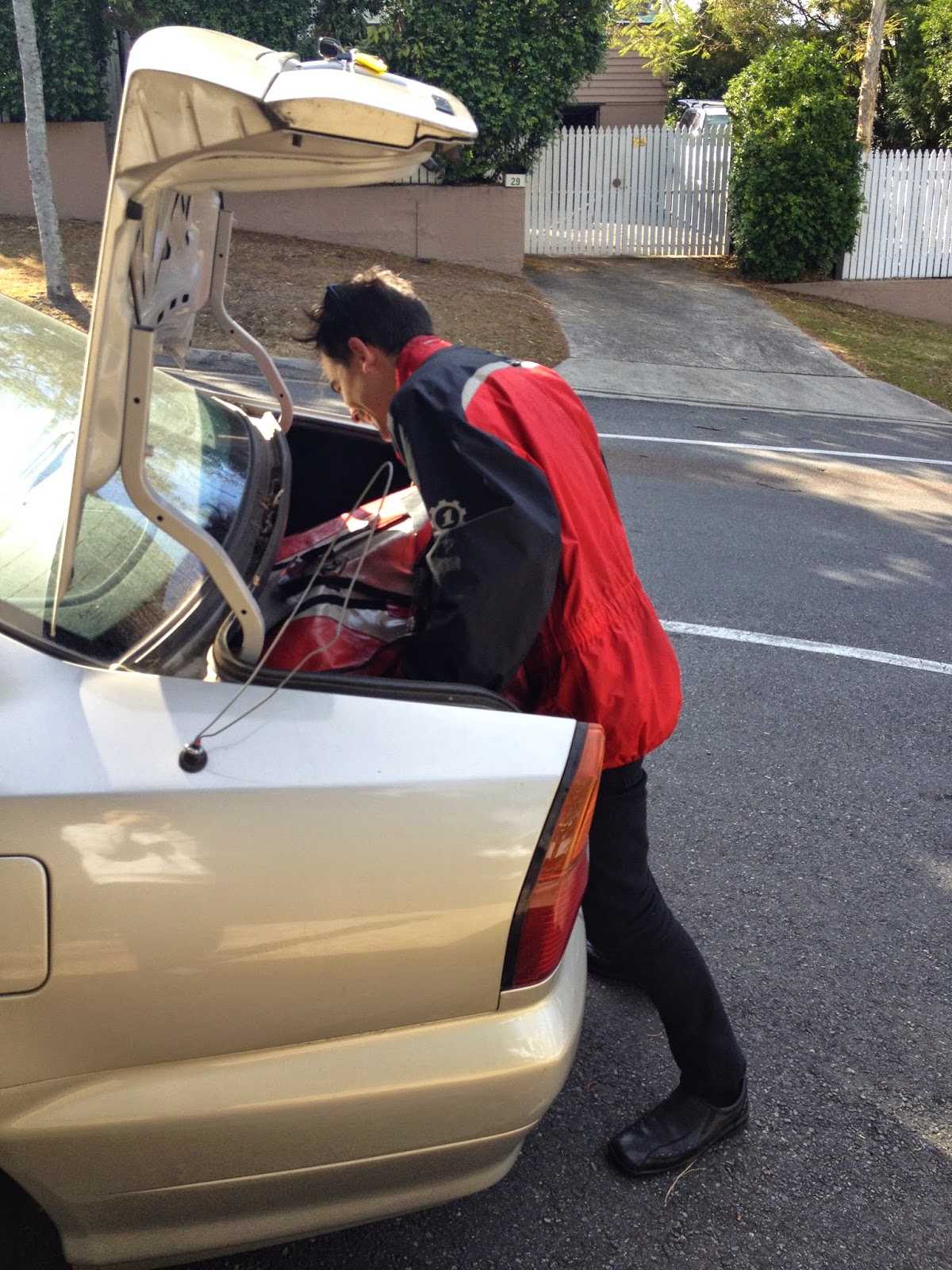 Now, sadly, this job is no more. It was impossible to work full time work as well as working 4-5 nights per week on call as a micro-scooter chauffeur. Thus with regret I gave my notice and handed in my gloves just last week. Some normality will soon be restored to my life, some friends will be caught up with and, you never know, some typewriters may even be bought in the near future. I’ll keep you posted.
Posted by Steve Snow at 21:12