A while ago I bought a Remington Portable 5 that used to belong to a Methodist minister by the name of Ken Beckett- a Patrol Padre in the late 40's - early 50's, with a patrol area three times the size of the state of Victoria. I posted on this typewriter and its incredible journeys a couple of months ago here. As mentioned, the repairs necessary were the feed rollers and the mainspring. The mainspring was almost OK, but not quite. It would tighten to a point before slipping and unravelling inside its casing. When tightened to just before this point, it would type OK for most of the page, but get very sluggish towards the right margin. 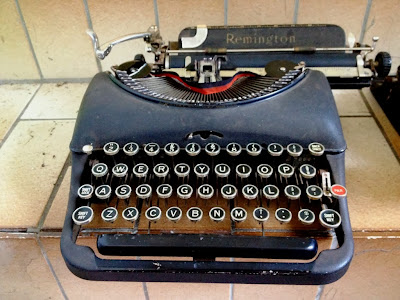 After being overseas for a couple of weeks and very busy at work either side of the trip, nothing had been done on any of my machines for ages and an email from Scott from the Filthy Platen asking whether I wanted to join him on a trip down to John’s place on Sunday was exactly the motivation I needed: “Yes please”. So Scott, Jane and I drove down last Sunday. Among many other purposes, this trip enabled me to finally pass onto Scott the parts-machine Smith Premier 10 which I spoke about here and for John to give me a seized parts-machine Remington Portable 4. From this machine I shall (hopefully) be able to extract the line spacing mechanism, clean it up and attach it to my own older model Portable 5 on which the line spacing mechanism is missing (mentioned here). The lucky thing however, is that the Remington Portable 4 and Portable 5 models have an identical mainspring, so I was also able to transfer the parts-machine Portable 4’s mainspring to Ken Beckett's Remington Portable 5.

The repair
The mainspring isn’t a difficult repair if you know how. I didn’t know how, but a combination of much appreciated help from both John and Scott means I can now blog about it as if I knew how to do it all along. Firstly detach the drawband, or in my case, cut off the improvised fishing wire draw-band and unwind it off the mainspring. You need a special screw-driver to undo the locking nut on the mainspring (see below). 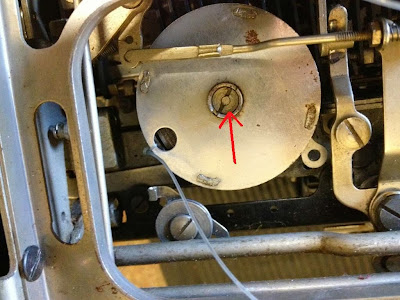 Scott came to the rescue here and in a flurry of sparks, worked some angle-grinding magic on a broken screwdriver such that a divot was made in the middle of the blade. Once the locking nut is off, simply pull off the mainspring and fit the replacement one. Without a replacement mainspring it’s still possible to pop the top off the mainspring mechanism and re-attach whichever end has come out of its divot making it slip, but I’m glad I didn’t have to resort to this. Tinkering with exposed mainsprings is a bit like playing with fire. I learnt this the hard way from experience with the pull-start mechanism from my old lawnmower. 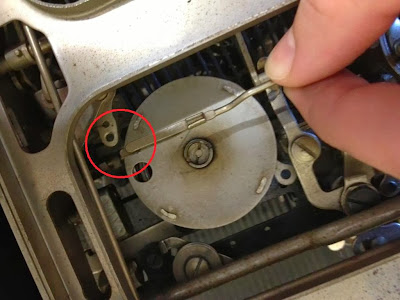 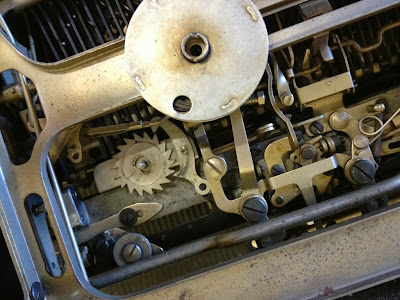 Simply take off and replace. The circular-saw-shaped ratchet thing also needs to come out and be attached to the new mainspring. It fits into the top of it, pretty straight forward.

When securing the replacement drawband onto the mainspring (in my case fishing wire), thread it through the hole in the top of the mainspring (visible in the photos) and tie a knot. Be careful however that the knot is descrete enough that it won't catch on anything as the spring winds and unwinds. One feels like quite the goose when one finds out that the mysterious knocking coming from the carriage at a certain point across its run is actually just the fishing wire tied to the mainspring bumping against the frame as the spring turns.

The feed rollers were the next job and there's no need to go into detail for this repair. What I will say however, was that even after replacing the feed-rollers with those from the Remington 4 Portable parts machine (which were somehow still in great nick, must have been replaced in its life time), it still wasn't rolling in paper straight. After carefully inspecting the rollers and checking the rod on which they roll was completely straight, I found that the metal frame in which the whole assembly sits wasn't completely straight. Without much room to move with the long nosed pliers to straighten it and without the time or patience to take the whole assembly off, I solved the problem with a slight bend of the metal with the pliers and also rolling on some duct-tape to fatten one of the end rollers. With a bit of trial and error it's now rolling in paper satisfyingly straight.

The first few verses of Duke Ellington's famous song came out OK, it's not a bad typer at all. But I can see that some further work (potentially just lubrication) is necessary for the carriage shift, as it's not dropping back quite fast enough if I'm typing at any speed. The ribbon also hasn't been replaced and is rather faint. Nevertheless, the old girl is back working again and I'm very pleased to have it back doing what it does best. I haven't heard back from Ken Beckett's grandson, but I'm sure he'd be pleased to know it's working again. Cosmetically I'm in no hurry at all to do anything to it at all other than a wipe with a damp cloth. It certainly doesn't look particularly spick and span, but then something that has travelled tens of thousands of kilometers shouldn't! 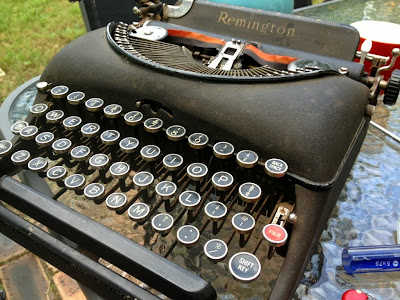 Yesterday I was in South Africa. But I'm not any more. During a week and a half there, I didn't see a single typewriter. Not even one. Although I must admit to not having looked terribly hard. So while nothing new was learned about typewriters in this foray across the Indian Ocean, something was learned about the design of more modern writing technologies. What brought me to South Africa in the first place- Cape Town to be more exact, was the Interact 2013 conference. This conference deals with the many and varied facets of Human Computer Interaction and technology design and my research institution kindly paid for the air tickets over there on account of the paper I was presenting.
Human-Computer Interaction or HCI represents an incredibly diverse and very exciting field of research that I have only become acquainted with during the past couple of years. The C in HCI is not restricted to personal computers and encompasses- mobile phones, digital noticeboards, basically pretty much any sort of computerised interface that we interact with in everyday life. A theory common to a lot of HCI work is that the people who will ultimately use a device or interface ought to be included in the design process. In relation to typewriters, I'd love to know whether and how typewriter manufacturers integrated their target market into usability testing and design. Also, of interest to many of us typewriter tinkerers, one of the keynote speakers at the conference mentioned the trend of using 3D printers for creating parts for vintage technology is becoming more wide spread and something that will certainly revolutionise the preservation of historical technology in the years to come.

Once the conference was finished I had five days to explore. Last Saturday a group of 9 random conference participants with a couple of extra days up our sleeves hired a taxi-van and spent a day exploring the national park around Cape Point and meandering back through some of the seaside towns. This group was comprised of a couple of student volunteers like myself, some career academics and practising designers. Although ages, experience and research fields differed, we had commonality of having participated in some way at the conference. Which brings me to the title of this post and frankly, the closest this post is going to come to discussing typewriters at all. Which is to say not very close. 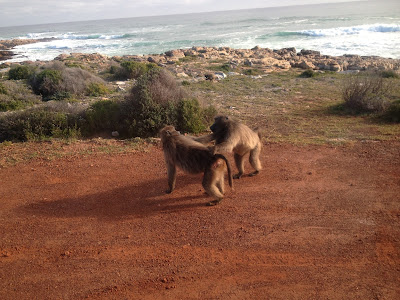 So what is the trackpoint / pointing stick / joy nub? It is of course the little red knob in the middle of keyboards on certain modern day typewriters (laptops) that moves the cursor. Although Wikipaedia uses "Pointing stick", I knew of it as a trackpoint, but have also heard of it referred to as a joy nub (as to joy stick). 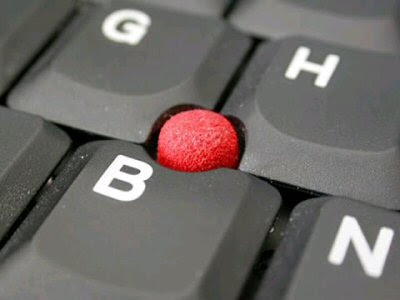 Regardless of what this thing is called, it is something that you use, but you don't really think about. It's just there and it works. Which is the hall-mark of a good interface design really. Because if you are aware you're using an interface to access something (rather than concentrating on what it is you're actually accessing), it's probably because it's difficult to use. Thus I would never have thought any more about this little thing, had it not been that the man responsible for designing it happened to be one of the random assortment of people sharing the taxi around Cape Point that day. The man responsible is Ted Selker, pictured below photographing the amazing scenery from the back of a truck. Ted is a computer scientist and designer with a very impressive list of achievements to his name. 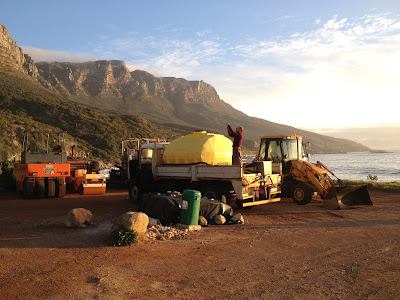 But what was nice about that particular day, was the fact the that work wasn't the main focus of the conversations between everyone. Rather than representing our work and our respective institutions like we did at the conference, we were instead a bunch of 9 people from 6 countries, enjoying a grand day out on the Western Cape. 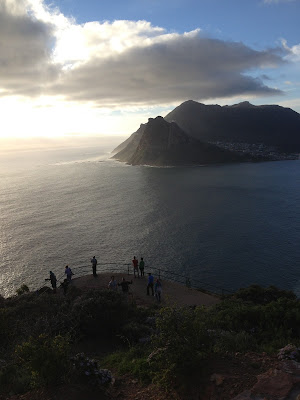 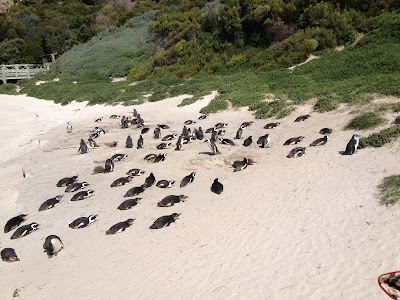 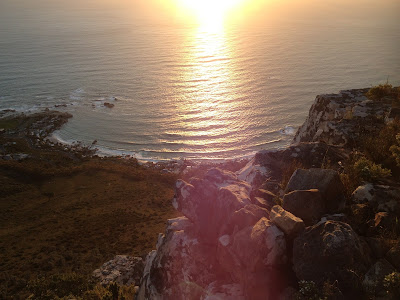 Now being freshly back in Australia I've got to come to terms with a whole bunch of work waiting for me, unseasonably hot weather and new conservative idiot of a Prime Minister running the country, who won the election while I was away. But then again, home is where the heart is and where the majority of my 15 typewriters are, so it's not all bad news.