Many service stations around Brisbane are progressively upgrading their tyre inflators from the older style units with mechanical pressure gauges (left) to the newer digital pre-set pressure units (right). 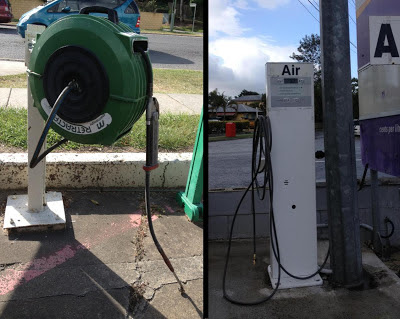 While the older style tyre inflators are operated by attaching the nozzle to the tyre, checking the pressure on the dial located on the hose and inflating as necessary, the newer digital variety require the user to input the desired inflation pressure into the unit before attaching the nozzle onto the tyre. The machine then automatically pumps or deflates until the pre-set pressure is reached. The key difference between the two  is that the newer version will not blow air until it is attached to the tyre, whereas with the older style is user-operated by the press of a button and blows air on demand.

This progressive upgrade to the new digital pre-set units has proven a real blow to the local community of Brisbane typewriter repairmen. Especially those on the lower end of the socio-economic scale who cannot afford air compressors with which to blast the dust out of their recently purchased typewriters. The Impatient Press recently caught up with Graceville local Gus Higgins:

“I picked up a grubby old Royal 200 from a garage sale down the road and naturally hopped straight in the car to pop down to the local servo and blow out all the crap. But to my horror they’d upgraded the air hose.... Bugger me if I didn’t then have to drive two whole suburbs just to find a servo with the old style air hose. What do they expect you to do? Gather up enough puff to blow it out yourself? With this emphysema I’m lucky to blow out a candle!”

One of the main perpetrator of this upgrade is Airtec Corporation- a leading manufacturer of digital service station tyre inflators. 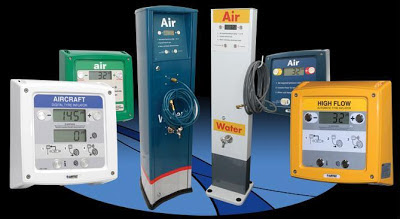 A statement on their website offers: “Airtec continues to conduct research and development to meet the needs of its customers and provide the most advanced, highest quality technology available” (reference above). However no mention is made anywhere about how their accurate and convenient new tyre-inflation technology may have unintended and disastrous consequences; leaving increasing numbers of ailing typewriter repairman like Gus collapsed on the garage floor for want of oxygen.

Airtec were unavailable for comment yesterday, as they were contacted well outside of business hours.

Max Cullen- Lawn Enthusiast: I had been starting to notice some unsightly bald patches on my otherwise emerald green front lawn. I went down to the local garden centre looking for some cooch seeds, but the lady behind the counter pointed me in the direction of Remington SJ Lawn Repair. 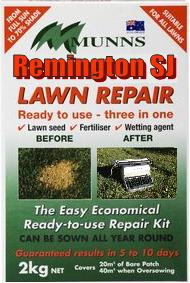 Doubtful of the results, I went and sprinkled this seed mix in liberal quantities on the affected patches of lawn and watered it in. Lo and behold, only three weeks later I’ve now grown three gorgeous SJ’s on my front lawn and the bald patches have all but vanished. Thanks Remington SJ Lawn Repair! 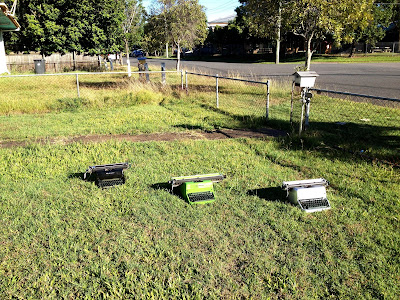 In other news, a thin parcel arrived at my front door the other day, postmarked from Pheonix Arizona. This was exciting not only because Pheonix is a long way away, but that what was inside was something that represented the first time I had received something material for a piece of my writing. A “payment” if you will. A while ago Ryan Adney put a call out on his blog inviting people to write a short essay on a topic pertinent to the typosphere. The writer of every essay received a very groovy poster. In the past I have received a school report card with an A on it for English. This was OK. More recently I received university funded air tickets to a faraway place when a piece of my writing got accepted into a conference. That was even better. But receiving material payment for your writing? C’est magnifique. Some may call receiving a poster for a short essay more of a reward than a payment, but for the purpose of inflating my ego like a new digital air hose to an underinflated car tyre, I am calling it a payment. Sure a poster won’t pay the bills in quite the same way a $10,000 cheque from Time Magazine will, but in many respects, receiving this hand-designed, hand-posted organic creation from a fellow typospharian is even cooler (provided one has other gainful employment, which I do). So many thanks to Ryan for this. Mine is currently taking pride of place above the “everything” table in the living room. 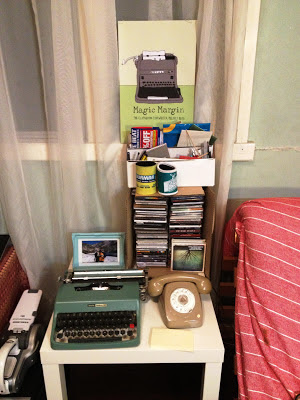 
A post of Robert's from back in April showcased a "totally dope" typewriter that he restored himself; a restoration that Cheech and Chong would have been incredibly proud of. So in the same vein as my earlier post on the funkiest video-game aliens of the 90's, inspired by Robert's psychedelic creation, and by Ton who recently re-visited the Polt, I decided it was time to re-visit the FuNk. 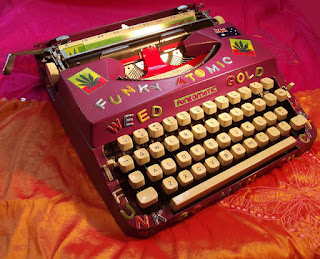 Before I started a blog myself, I enjoyed reading about different typosphere contributors poking fun at the propensity of certain typewriter sellers to use words such as FuNkY and aToMiC in order to sell their Brother/Kmart/Craftomatic/etc typewriters (quite sucessfully) for far more than they were worth. Part of me used to scoff and grumble, aghast at these silly buyers forking out the same amount of money for a plastic Kmart that would almost buy you an Oliver 5; flustered by these snake-oil salesmen with the temerity to con simple minded buyers out of their hard earned money with little more than creative words... But then another part of me, the ironing board cover salesman within me, thought: "Actually, no. Good on you!". Because a good transaction is not measured in dollars; rather it constitutes a transaction in which both parties walk away completely satisfied.

Some background first. As a holiday job during university, I used to sell top-of-the-line ironing board covers from one of those small stalls you'll find in the thoroughfares of most indoor shopping malls. Bear in mind this was pre-financial crisis, when people had money (or at least credit) and of a Saturday morning I would spruik these ironing board covers as well as other outrageously priced bourgeois laundry items. Admittedly the ironing board covers were pretty good. "Yes indeed, these last over twice as long as conventional covers (stroke the cover at this point). When one side finally starts showing wear, or if you happen to burn it accidently, just turn it over (demonstrate this) and you've got a brand new cover (shiny smile)". But these covers were $40 each and that was 8 years ago, but they still sold like hotcakes. As an instant-noodle-eating university student, this blew my mind. The stall was just down the escalator from a department store in which you could spend $9.50 and buy a (admittedly slightly inferior) cover which did basically the same thing, just without the personalised spiel and smartly dressed young salesman encouraging you to stroke it first.

So after rationalising it this way, I thought "good on all these creative typewriter sellers and their colourful language to match their colourful plastic typewriters!" At the end of the day eBay runs on keywords and maximising your target market is a good thing. It's not that I propose it's a good idea for everyone with anything from a Sholes Visible to a Yost 5 to a plastic Brother to start using this language, but if you've got a machine that justifies it, lets create some imaginative ebay ads!!

Now considering the particular success that the words fUnKy and aToMiC seem to be getting, I think let us first concentrate on these. In defining the terms, I reached straight for my Concise Oxford Dictionary; admittedly slightly long in the tooth these days. While the definition of "atomic" was as expected, the definition of "funk" surprised me slightly. 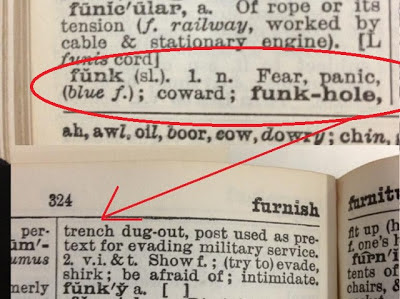 So what is "funky" these days then? To investigate, I trawled some ebay listings while on the train to the city. Aside from typewriters- in my very limited sample size- it appears that "funky" is most often attributed to clothes, while "atomic" is more often attributed to furniture. The two words were quite regularly found together and when they were together, they were marginally more likely to be written in the fUnKy AtOmIc style. "vintage" and "retro" were also commonly associated with many things funky and atomic. 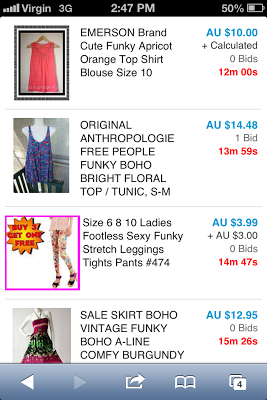 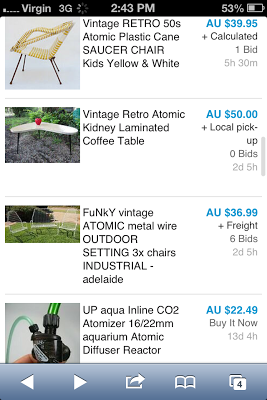 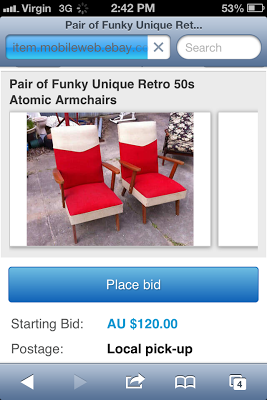 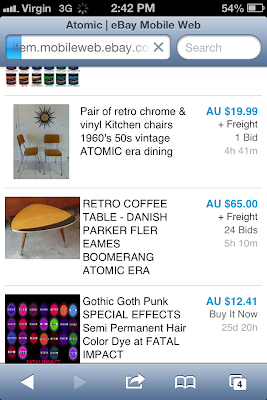 With more time, I'd love to keep an inventry of the many different Japanese typewriters sold on Australian ebay and attempt to work out the average marginal increase in sale price achieved by describing one as funky and/or atomic. If anyone has done this or has the time to do this, please let me know!! I would also welcome comments from overseas typospharians as to whether this same FuNkY aToMiC marketing is quite so prevalent outside of Australia?