I found this book at a garage sale the other week and it's been a gread read. Having such a slow and useless scanner, it's far quicker (and also kinder to the falling-apart book) to photograph each page instead. This edition was published in 1939, however this was the fourth edition and it appears that a fair bit of content has been retained from earlier editions. Designed to get you through the tough competitive typing schools of the late 30's and early 40's, this book is one thorough volume. It is 245 pages thick and contains over 190 separate typing exercises as well as all sorts of other interesting bits and pieces about typewriting.

As much as I'd like to share the whole book here, I'm not keen on taking 245 separate photographs and have instead included some of the more interesting bits as well as a table of contents. This way, if anyone sees something of interest to them in the table of contents just let me know and I can share it later on. The pencil markings throughout show that it's owner was a diligent student. The name written on the top of the second page is Janice Smith, however I believe this may have been the second owner, as looking closely it appears a first name written in pencil has been rubbed out and written over... 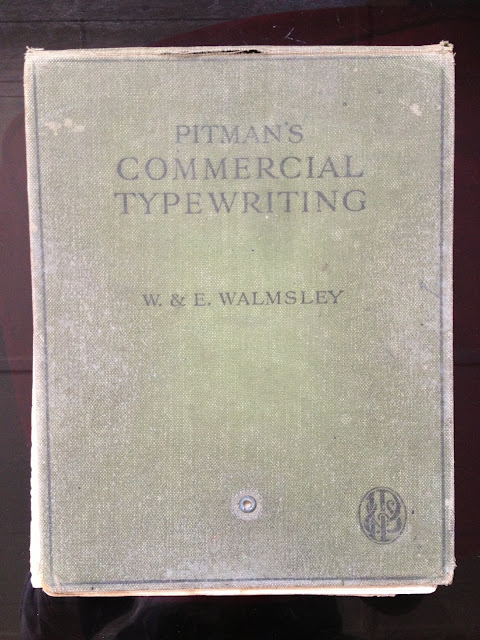 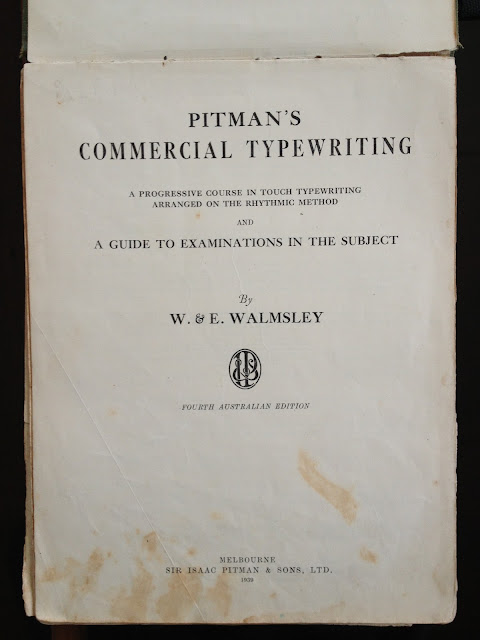 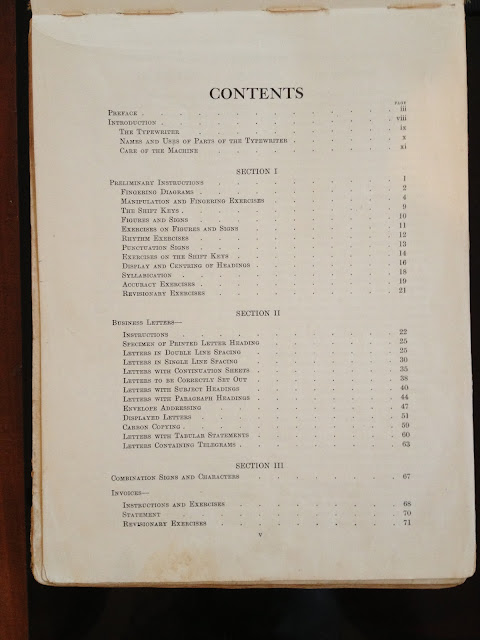 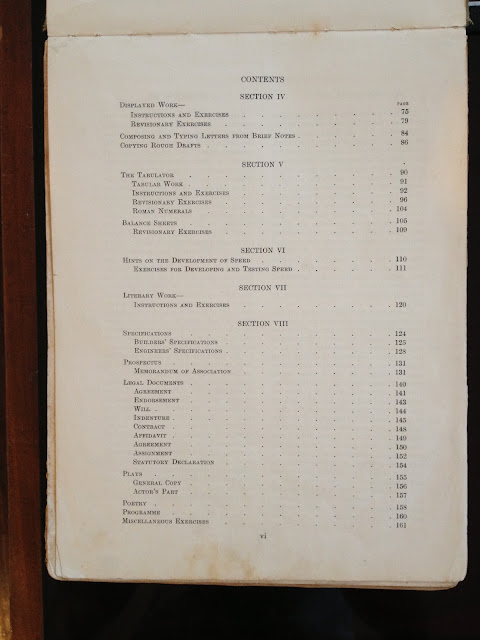 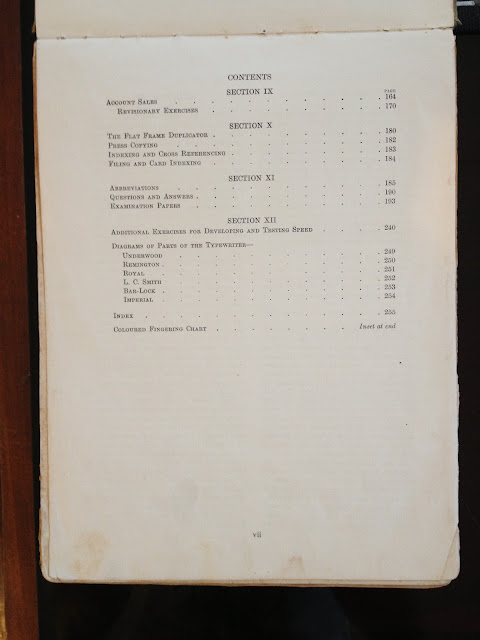 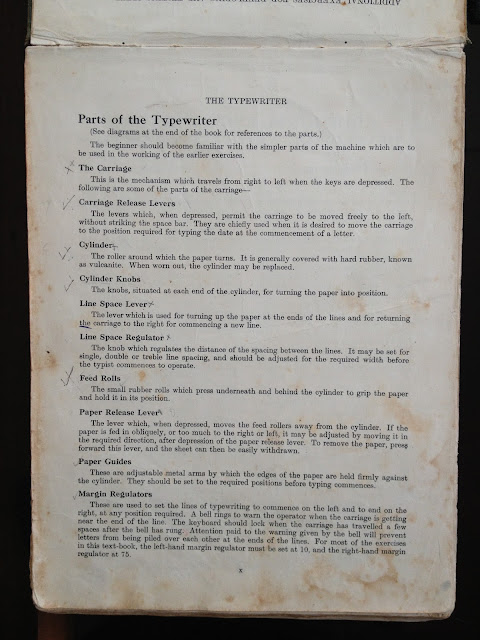 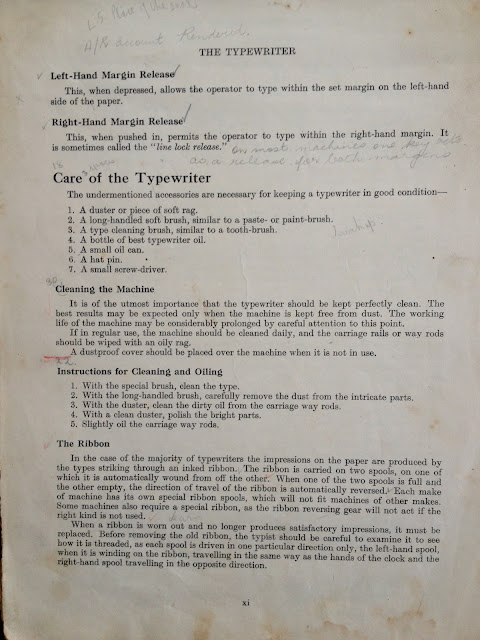 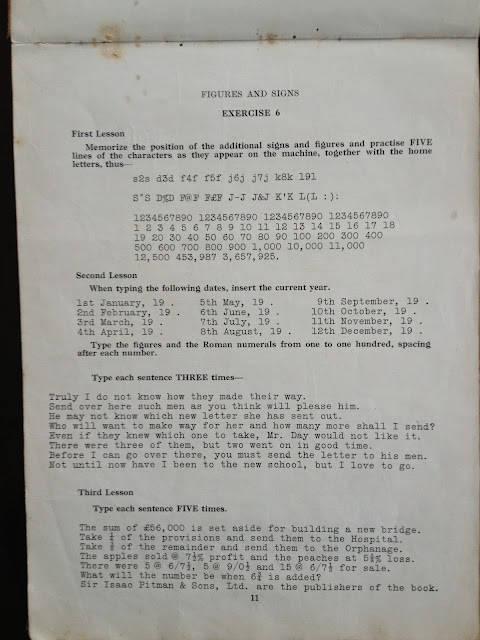 However once you get down towards the pointy end of the book, most of the exercises beyond Exercise #130 are downright fearsome. The book has reproduced different peoples' hand-writing and deliberate mark-ups which must be correctly deciphered and typed. This for me was the real penny-drop reality moment and served as an illustration of the stark reality of exactly what it must have been like to be a typist back in the day. See I used to smile whistfully at the black and white photographs of gorgeous young typists at their gorgeous old typewriters, rather taken with the old-timely romance of it all. But this book really served to give that impression of mine a kick in the guts. Check out some of the later exercises...... 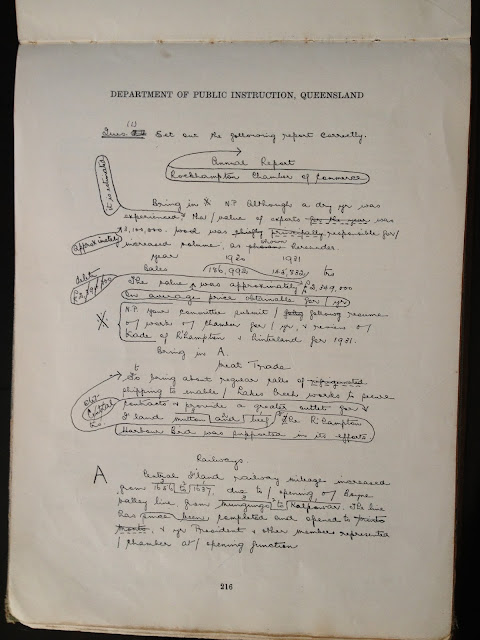 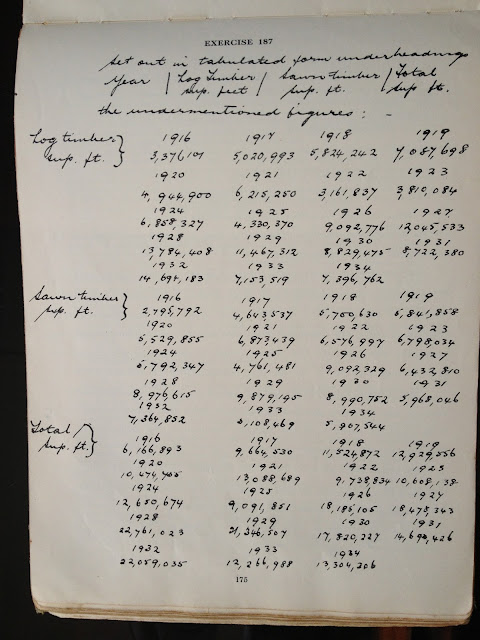 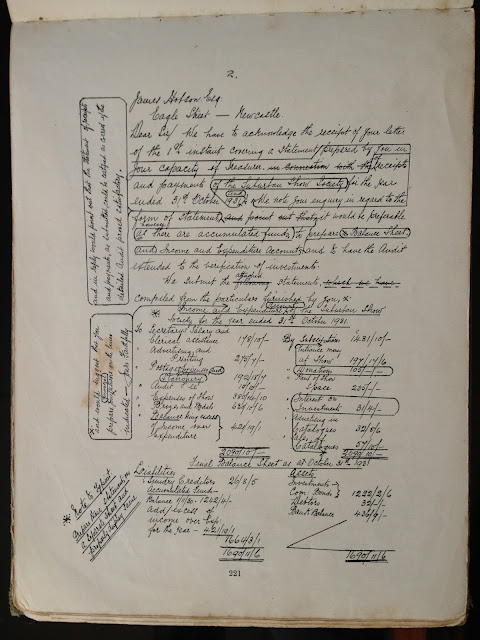 Yes, typewriters definitely played a huge role in the emancipation of women, bringing women into the workforce and a bunch of other good things that have helped bridge the gender divide and improve womens standing in society more generally. But the job itself? Long hours of mindlessly reproducing words written by someone else, day after day, week after week. words from one page to another. And not just copying clean text either, but turning your eyes square trying to decipher some idiot's barely legible, marked up, blotted scrawl at the same time! No simple delete procedure, those niggly little muscle aches I tend to get if I type on a typewriter for too long, RSI over the longer term... It must have been hell! This realisation dramatically increased the already considerable respect I had for these women (and the occasional man) of yester-year, but removed any romantic notion of me ever possibly enjoying it as a job myself. The book also covers the use of things one might also expect to come across as a typist... 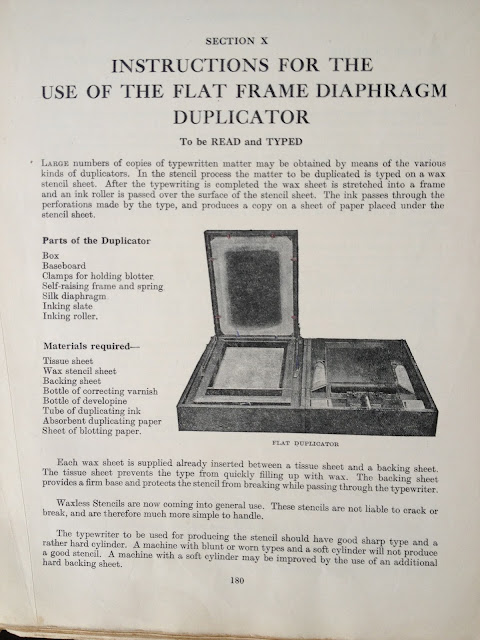 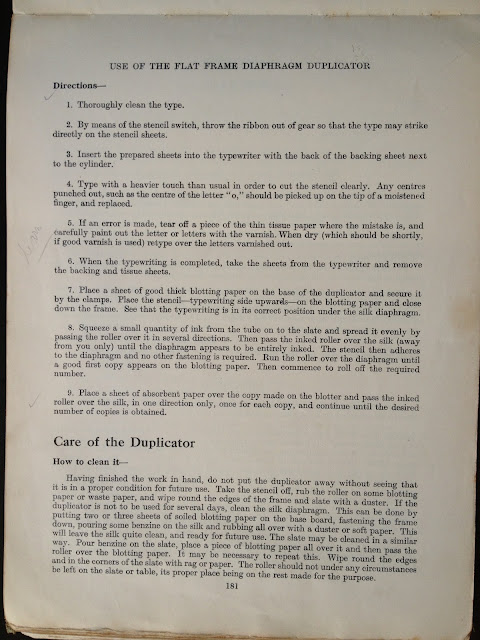 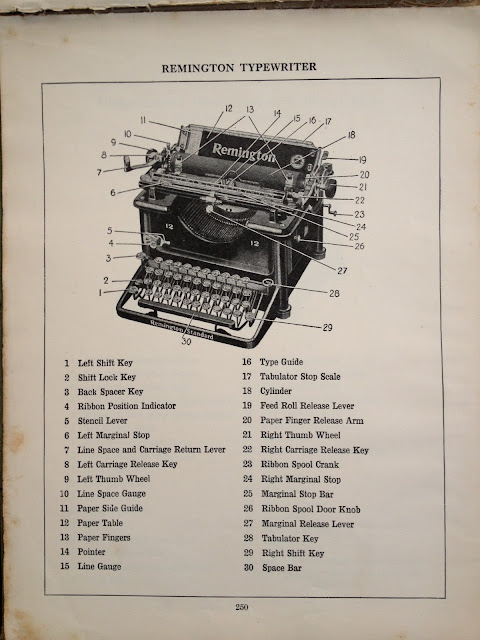 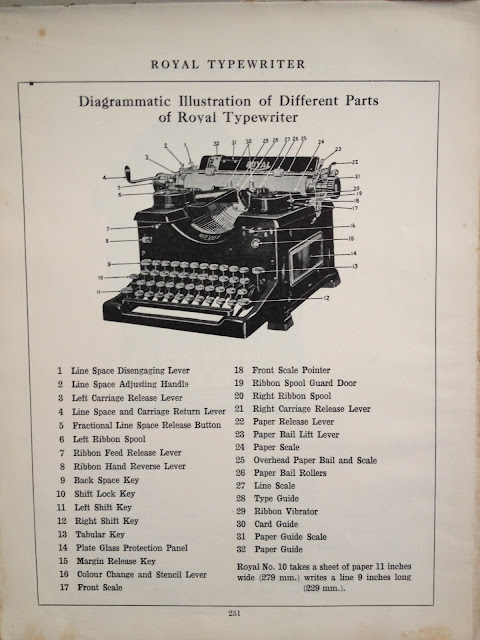 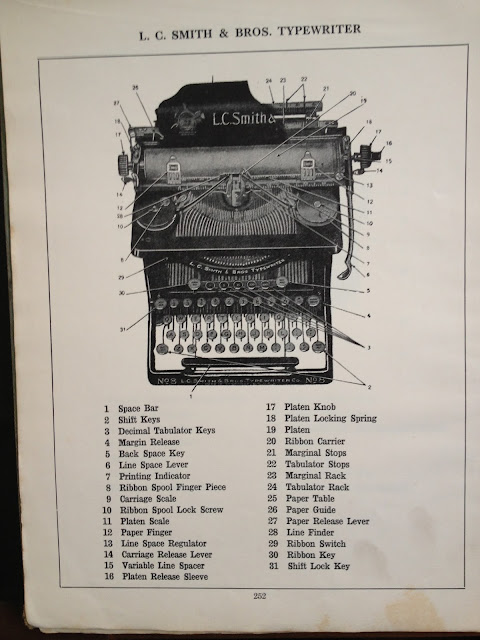 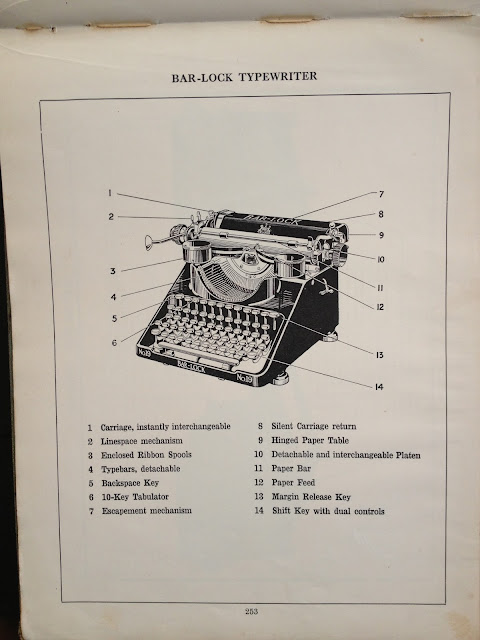 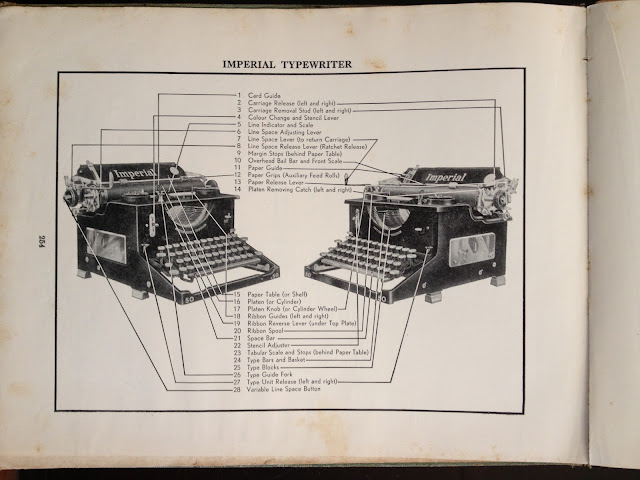 Finally, on a blank page towards the end of the book, was a number of exam-prep notes written in the beautiful yet unfamiliar old-school cursive of my grandma's generation (for instance: "The main essentials of producing good typewriting are: 1. accuracy 2. neatness 3. speed". Unfortunately the pencil has faded such that it's hard enough to see under direct light and would never come up in a scan or photograph. Nonetheless, I've copied out a letter which was also written on this page. I believe this letter may also have been something required for the exam, but that each student was to write their own letter, thereby giving us a little glimpse into one 15 year old typist's aspirations:

Dear Sirs
In reference to your advertisement in today's "Times" enquiring the services of a Junior Typist, I beg to apply for the position.
I am fifteen years of age and for the past eighteen months was a student of a Commercial school. My courses included Bookkeeping, Shorthand and Typewriting, in all of which I am proficient. I have a Junior Typewriting Certificate and my speed on this subject is (illegible- 60?) words a minute shorthand (corrected) speed is eighty words a minute.
Enclosed are copies of references as to character and ability from Mr J Carey, Public Accountant and Mr R Hunt, Commercial teacher.
Thanking you in anticipation of a personal interview.
Yours respectfully

I do wish they had included their name!

Who wants to sell typewriters to the Russians?


Do you have a stack of wedges in the corner? Do you have a whole pile of plastic Brothers and Silver-Seikos sitting unused and unwanted? Here is your chance to donate them to a worthy cause and even raise some Rubles for your troubles!

Concerned with data security and leaks of confidential information, the Russian government is buying up old typewriters to use in place of computers (refer to the link below). The typosphere needs to get Putin on the phone and fast!! 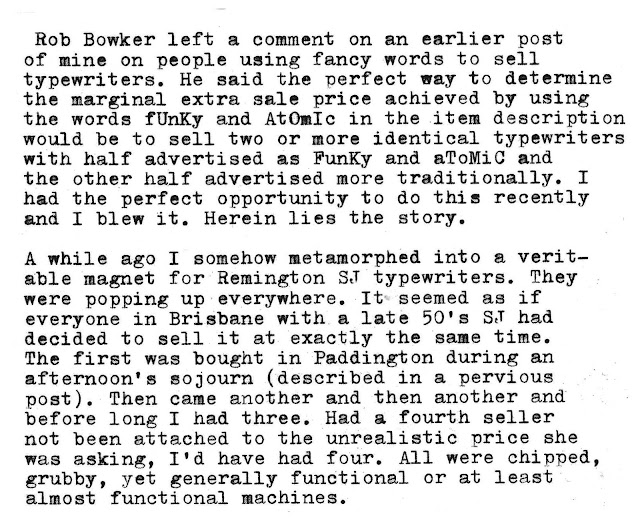 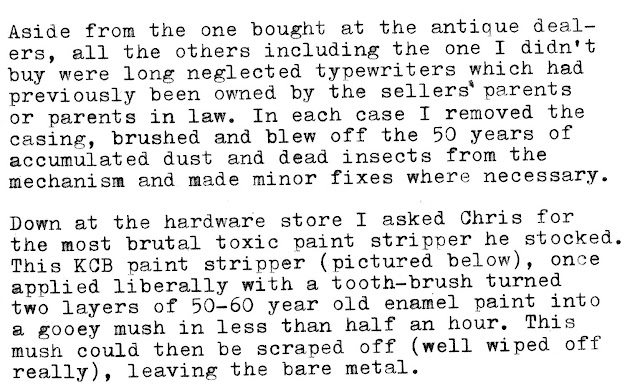 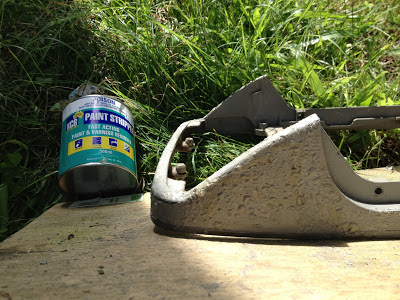 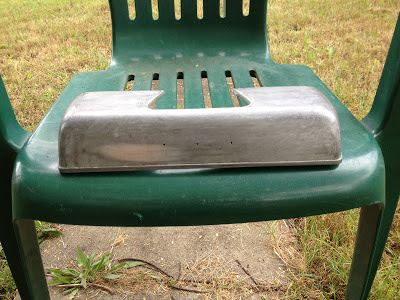 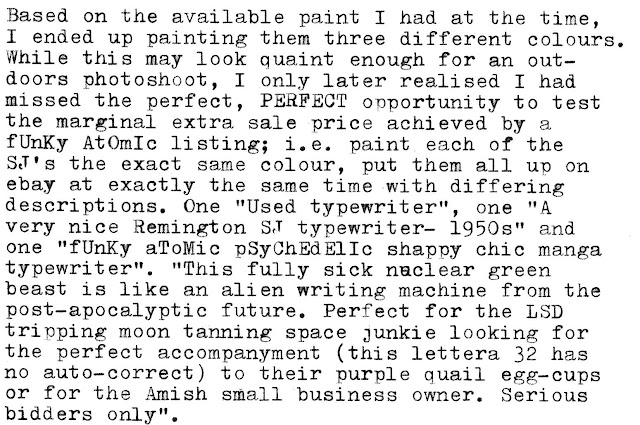 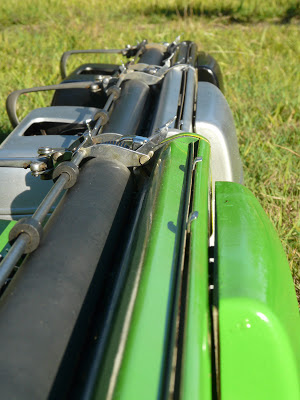 Instead I blew this chance completely and have ended up selling them in their different colours with uninspiring accurate descriptions. What has been interesting, is that nobody wants a silver typewriter. All typewriters were put on Gumtree one after the other. The black and green SJ’s attracted a huge amount of interest and both sold within a couple of days. One sold to a girl in her early 20's, who patiently listened as I excitedly demonstrated all the features to her, before I worked out she was only going to use it as a display. The black one went to a friend who wanted to display it at his work alongside some super old-school computers. The silver one on the other hand was put on Gumtree with the same description, same photo location and the same price, but hardly attracted any interest at all. It sold yesterday to the second of only two enquiries in almost three weeks. Go figure...? The silver one sold to a 30-someting chef-looking guy who was looking for a replacement "everyday typer" since his last one gave up the ghost. Before it sold I did however type up lyrics to a couple of Jonny Cash songs...

This example demonstrates what happens when you restore a dry ribbon with WD40 but don't give it long enough to dry and don't clean the grub out of the letters on the typeslugs first. In the 30 minutes between the seller phoning me up and arriving at the doorstep I changed the ribbon to a shop-bought ribbon and de-mucked the type slugs and gee it made a difference. Unfortunately the proof is at the house of the new owner. 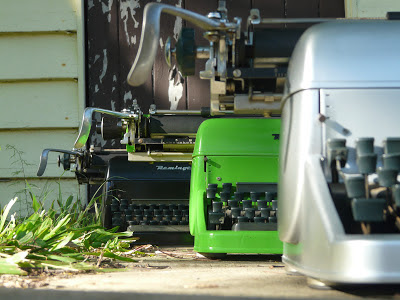 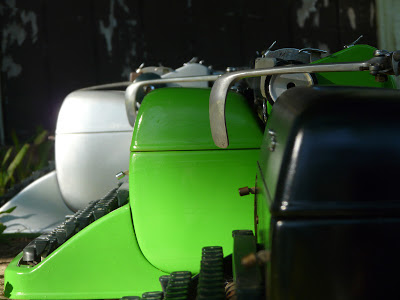 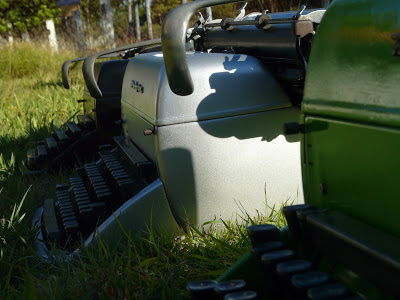 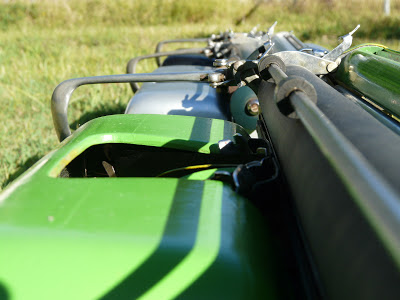 P.S. Sadly I can take absolutely no credit for these "SJ's in the wild" photos aside from lugging the bastards outside. Props to the more artistically capable girlfriend.