One thing you can count on when working with typewriters is that you’ll be surprised. The typosphere is already littered with stories of typewriters surprising people in all sorts of different ways, from quirky histories to unheard of model names to millions of different repair curiosities. Herein lies a story of yet another thing I didn’t expect.

This post represents another installment in the on-going saga of me periodically having a go at repairing my Smith Premier 10A. For a very interesting account of some of the early history of this curious model of typewriter, check out a recent post by Robert Messenger here.  I have also detailed my various attempts at repair of my SP10 in earlier posts on this blog here and here. At the end of the second of these posts, I had resigned myself to the fact that unless a “parts” SP10 could be located or unless a designer could model up and 3D print me a new one, that my otherwise functional SP10 would remain backspaceless. The button was there but unfortunately the mechanism was not. 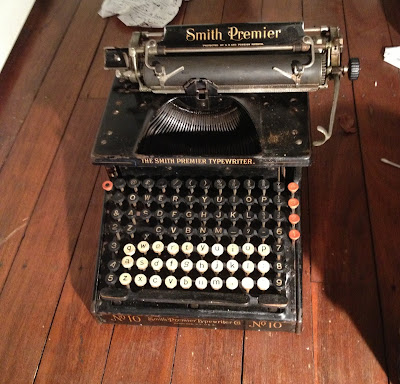 The first surprise was that only two weeks or so after publishing the latter of my two earlier posts on repairing my SP10, what should come up on eBay, but a “not working Smith Premier No. 1" which I identified as an SP10 of the same era as mine, located less than 10km away. Unfortunately the seller was asking $500, so I didn’t give it any further thought, but kept a watch on it nonetheless. After not selling for $500 (fancy that), it was re-listed for $300, for which it also didn’t sell. At this point I contacted the seller and cheerily offered less than 1/3 of that price and to my more genuine surprise, was invited over. After having a look and a poke around with it, I thanked the lady and left. The decals were faded, two keys had been replaced by metal knobs, the keys were sticky and the carriage didn’t really move freely, though it did move with a bit of a push and a jiggle. The overflowing ashtrays and the ambient haze about the kitchen assured me that the typewriter was not from a smoke-free home. But, more importantly, it had an extant backspace mechanism.

I had a very quick and very quiet inward dilemma while fiddling around in this lady's smokey kitchen. In this dielemma, Dreamy Typewriter Steve said: “Wow, an identical SP10 with a working backspace! You could even do this one up too; well go on, buy it straight away!” However Rational Practical Steve countered with: “Seriously? Are you seriously willing to pay $90 for a backspace mechanism? You’re never going to do this one up, where will you get the parts from? This is the parts machine! Ask her for a glass of ice-cold water, pour it all over your head and leave promptly”. Practical Rational Steve won this argument and I left empty-handed, albeit dry-headed.
Typosphere to the rescue.......
That same night, sitting at my own kitchen table feeling sorry for myself, with my backspaceless SP10 staring me right in the face, a thought struck. I knew Scott K from The Filthy Platen had inherited a non-working SP10 from Robert M and could probably do with some parts himself. Why don’t we split the cost of the machine, each fleece what parts we wish, ending up with proud, functional SP10’s? We could even put the fully pillaged parts machine back on eBay as a "conversation piece" with a disclaimer that it’s been fleeced like a sheep and split whatever small sale price it fetches. Thus only couple of SMS’s and 24 hours later and I had two SP10’s in the laundry and a grin from ear to ear. 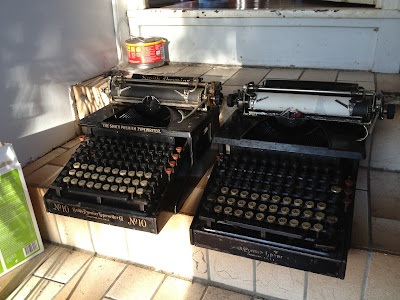 The second surprise came when transferring the backspace mechanism from one SP10 to the other. I put off this job for a couple of weeks, partly out of apprehension and partly until I was sure I had a good 2 unbroken hours up my sleeve if need be. I started off by taking plenty of photos of the mechanism from each side to refer to if everything went pear-shaped. In the case of the SP10, at least those built within a couple of years of 1910, the backspace mechanism represents a push-rod, activated by the backspace key, which pushes on this small piece of metal (see photo below) which pivots around this pole thingy and catches the huge wheel that moves the carriage (also pictured below). 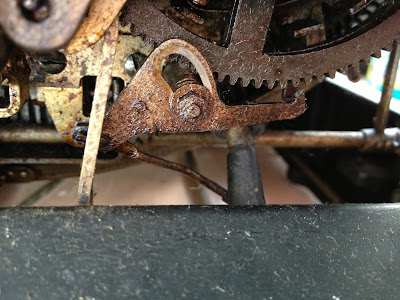 Looking from the back of the typewriter 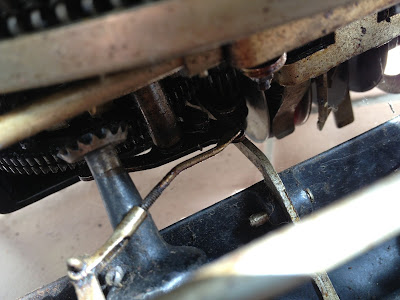 Looking from underneath
The pivoty metal bit is sprung with a spring around the pole so it returns home after ratchetting the wheel connected to the carriage a single space backwards. Several things are adjustable including the push-rod, the pivoty metal bit and the backspace key itself. 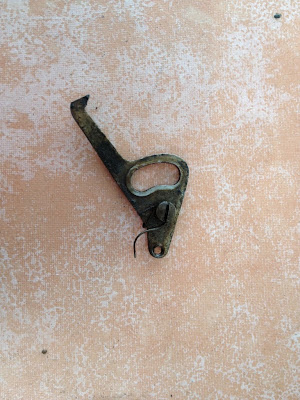 Backspacer removed﻿
To my astonishment however, the job took around 10-15 minutes. By a stroke of luck the adjustments on my machine must have been identical to those of the donor machine and with a couple of unscrews, re-screws and the tiniest bit of fiddling, the job was done and my previously backspaceless SP10 was backspacing like a champion. The number of times something that should be quick, (like attaching a spring to a paper-plate or reattaching a platen without disturbing the line-space mechanism) has taken me ages and ages and left me boiling with rage... Yet this job where I had prepared for an epic battle took me quite literally around 10-15 minutes. The parts machine SP10 is now ready to be transferred into Scott's capable hands to be further fleeced of it's working parts.